skip to main | skip to sidebar

Sorry About Not Keeping UP, There will be a Grand Championship This Year

I've had some things health-wise nagging at me for most of the spring that has really sapped my energy.  I go fishing, but then just have to crash.  Seeing as how I didn't get the Grand Championship stuff done before ice off.  It went to the back burner.  It will be the same rules as last year.   Hopefully, I'll get it updated here at the blog in the next week.
Posted by Basspastor at 2:25 AM No comments:

Alan Steinbauer is the 2018 Grand Champion

The Minnesota Bowfin Club now has it's 5th two-time Grand Champion.  Alan won this year's championship with a 26" fish caught on a Berkley Big Tex Pit Boss out of Shields Lake in Rice County on June 26th.  He joins me Dave Maas, Chuck Steinbauer, Dennis Lothspeich, and Chuck Fields as two-time champions.
2nd Place this year went to Jim Svenningsen with that 24-inch fish.
3rd Place went to Jim's wife Stacey with a 23-inch fin.
Posted by Basspastor at 2:53 AM No comments:

Sure I didn't get around to specifying rules for this year.  But here they are now on the last day.  Same rules as last year.  Contest ends June 30th.  Need to inform me of your catch by July 3rd.

Thank You
MBC President
Posted by Basspastor at 4:28 AM No comments:

Posted by Basspastor at 2:42 AM No comments:

This big barker allowed Tyler Mohr to win the 2017 Minnesota Bowfin Club Grand Championship.  I believe it was caught in a backwater somewhere on the Mississippi River.
2nd Place went to Chuck Fields for a 23 incher caught out of Gull Lake.
3rd Place went to Dave Maas  with a 21.5" fish caught out of the Platte River on a frog. 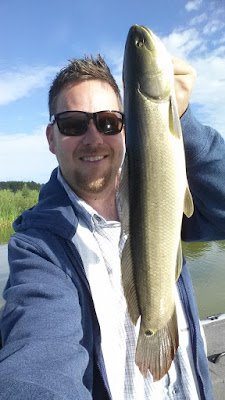 Honorable Mention goes to Jim Svenningson for this fish caught in Long Lake in Isanti County on a yellow spinnerbait.

Posted by Basspastor at 1:42 AM No comments:

Thanks
The Prez
Posted by Basspastor at 6:14 PM No comments:

Note Rule Change: This year the Grand Championship tournament end date is June 30th and you must report your catch no later than July 1st.

ELIGIBILITY- Anyone catching a Bowfin in the State of Minnesota including Border Waters.

SPECIES - Only Bowfin (Dogfish) caught in Minnesota waters are used for determining the season's Grand Champion.

TOURNAMENT HOURS/SEASON - All hours from ice-out through June 30th are open for competition.

TOURNAMENT WATERS- All MN bodies of water with a population of bowfin are eligible from their individual date of ice out.

LIVE RELEASE - All fish must be returned to the water alive and unharmed after measuring.

FISHING METHOD - Only artificial lures may be used to take fish.

OTHER SPECIES - Any other fish caught, which is not in season, must be returned to the water immediately. It is expected that MBC members and tournament participants will within reason try to minimize the odds of catching fish that are not yet in their open season.

MEASURING FISH - Fish must be measured with the mouth (closed) to the tip of the tail.

REGISTRATION - Send your name, the length of the fish, the date caught, and the lure used to basspastor@hotmail.com
Optional: Include body of water caught from.

Registration must be in before midnight on July 1st unless the deadline is extended.

LEADING FISH- In an effort to encourage reporting of bowfin catches the length of the leading fish will NOT be communicated until the tournament is over.

Past MBC Grand Champions with winning fish length since Club founding in 1999:

A Big Fin From Last Summer


This doggy was caught on a chartreuse spinnerbait on Kroon Lake by Matt Filla.
Posted by Basspastor at 10:54 PM No comments: 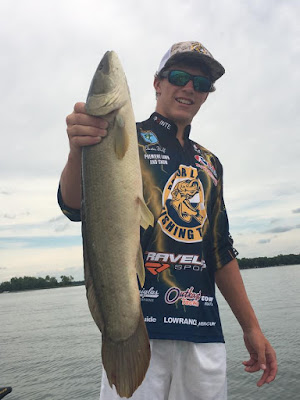 This fish was caught during a high school bass tournament  on Clearwater Lake.
Posted by Basspastor at 2:51 PM No comments: 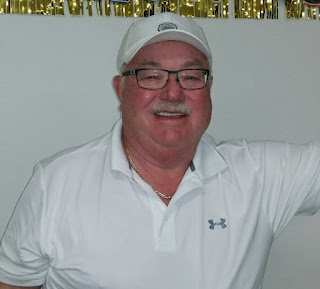 Barry Mowers caught his 26" bowfin on Leech Lake on Memorial Day on a brown River2Sea Yabbie to win this years title.

The only other person to register a doggy this year was Chuck Steinbauer with a 24.5".  I think he told me he got it on Platte Lake.

Next year the tournament is going to run from ice out through the full month of June.
Posted by Basspastor at 12:40 AM No comments:

Promote Your Page Too